Kaduna Governor El-Rufai Under Probe Over ‘Damning’ Memo To Buhari

The All Progressives Congress (APC) is probing a damning memo addressed to President Muhammadu Buhari by the Kaduna State Governor, Mallam Nasir el-Rufai.

The memo, which is dated September 22, 2017, was published yesterday by some prominent newspapers.

In the memo, it is understood that the Kaduna State governor raised the alarm that the country was drifting under the leadership of President Buhari.

Following the publication, the leadership of the ruling party has commenced a discreet inquiry into the memo – how it got to the media and the motives for its release six months after it was submitted to the president, Tribune reports

It was also gathered some government agencies are seeking to know how the memo was leaked to the press and the motives behind it.

Speaking with Saturday Tribune on phone, APC spokesman, Mallam Bolaji Abdullahi said the APC leadership was studying the memo and would give an appropriate response next week.

I am still trying to read it. It is about 30 pages. So, we don’t have a position on it yet.

We are still studying it; after studying it, we will possibly have a position to release to the media by next week.

In the memo, Governor Nasir el-Rufai suggested that the president was not in control of his party and government.

Mr. President, there is an emerging view in the media that you are neither leading the party nor the administration and those neither elected nor accountable appear to be in charge, and therefore the country is adrift.

He also expressed concerns over what he called  the disconnect between the governors elected on the platform of the party and President Buhari, pointing fingers of scorn at aides of  the latter.

He equally indicted the national working committee of the party of cluelessness.

This situation is compounded by the fact that some officials around you seem to believe and may have persuaded you that current APC state governors must have no say and must also be totally excluded from political consultations, key appointments and decision-making at the federal level.

These politically-naive ‘advisers’ fail to realise that it is the current and former state governors that may, as members of NEC of the APC, serve as an alternative locus of power to check the excesses of the currently lopsided and perhaps ambivalent NWC.

Overall, the feeling even among our supporters today is that the APC government is not doing well. I am distressed that our government is seen not to be succeeding mostly due to the failures, lack of focus and selfishness of some you have entrusted to carry on and implement your vision. I am troubled that our own missteps have made the PDP and its apparatchiks so audacious and confident. 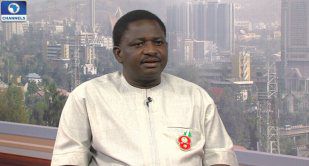