DONALD Trump has claimed a horrific chemical attack in Syria which left more than 50 people dead was “a consequence of” Barack Obama's time in the White House.

Mr. Trump said the deadly attack, which was followed by a missile attack on a hospital treating victims, was due to his predecessor.

White House spokesman Sean Spicer said the attack, the death toll of which is expected to rise above 100, was “reprehensible” - before pointing the blame at Mr Obama.

Today's chemical attack in Syria against innocent people including women and children is reprehensible and cannot be ignored by the civilised world.

These heinous actions by the Bashar al-Assad regime are a consequence of the past administration's weakness and irresolution.

President Obama said in 2012 he would establish a red line against the use of chemical weapons and then did nothing.

The United States stands with our allies across the globe to condemn this intolerable act. The US added it was “confident” Assad's government was behind the horrific attack.

Human rights organisations said the attack could have been carried out by Russian jets aiding the regime's campaign against rebel forces.

The US believe the chemical agent sarin was used. If confirmed, it will be the deadlies chemical attack since the same gas killed hundreds of civilians in Ghouta near Damascus in August 2013. Syrian opposition politicians said such attacks were taking place because Mr Trump had given Assad free reign by refusing to openly condemn the dictator.

Disturbing photos show dead children piled into the back of a truck following the attack, their eyes open and skin blotchy.

Videos show survivors struggling to breath and in extreme discomfort and pain.

Another video appears to show the hospital dealing with most of the victims being targetted in a rocket attack. 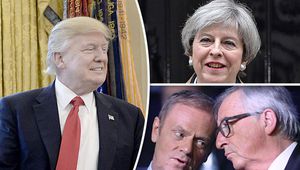