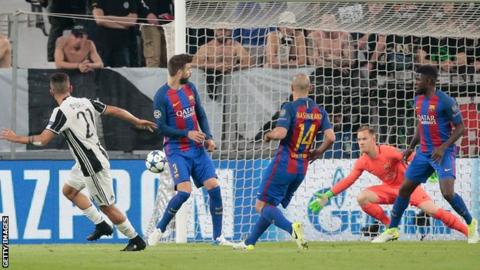 The Argentine forward curled home both of his goals before the break, the first from an angle inside the box and the second from a central position on the edge.

Juve turned a dominant lead into one that should see them go on and win the tie when Giorgio Chiellini showed strength and guile to steer home a header from a corner.

For the second European round running, Barca - who were as defensively suspect as they were in losing 4-0 to Paris St-Germain in the first leg of their last-16 tie - must recover from a heavy away defeat to progress.

However, after their record-breaking achievement to overturn that deficit against PSG, they will retain hope heading into the return leg at the Nou Camp on Wednesday, 19 April.

The last time these sides met in the Champions League was in the 2015 final, when Barcelona won 3-1.

The Italians are a much-changed side, with only goalkeeper Gianluigi Buffon and defender Leonardo Bonucci starting both the game in Berlin and Tuesday's in Turin, but they played like a team with a score to settle.

The opening 20 minutes were a lesson in high-pressing, aggressive play that created a clear headed opening for Gonzalo Higuain to spurn before Dybala's two strikes.

The remaining 70 minutes saw Juve retain a high work-rate but with the luxury of strategically selecting their moments to counter-attack.

This approach twice allowed Higuain to have shots that were saved by Marc-Andre ter Stegen before more lax defending - this time from Javier Mascherano, who had been moved to centre-back from midfield at half-time - allowed Chiellini to head home following a corner.

The win means Juve, who have won their past 32 Serie A home games, are undefeated in 18 European games in Turin.With the second-best defence of any side in Europe's top-five leagues and having gone 441 Champions League minutes without conceding, the Italians are well-equipped to avoid wilting under second-leg pressure in Spain.

Barcelona's heroics in the return leg against PSG papered over the cracks of a terrible first-leg display in the French capital.

After another heavy away defeat - their third in four Champions League games on the road and a second in succession after Saturday's La Liga loss at Malaga - there is no escaping the feeling this is a team in decline.

They are often shambolic at the back, with Samuel Umtiti and Jeremy Mathieu error-prone and Mascherano a fading force.

Andres Iniesta is a class act in midfield and the attacking unit of Lionel Messi, Luis Suarez and Neymar is unrivalled in Europe, but only the talismanic Messi proved a threat in Turin.

He had a goal rightly ruled out for offside, curled a shot just past the post, laid on a defence-splitting pass for Suarez to shoot wide and another to send Iniesta clear only to see Buffon superbly claw his shot past the post.

Buffon's instinctive save not only denied Barcelona a vital away goal, but came just 76 seconds before Dybala made it 2-0.

Luis Enrique's side have come back from a seemingly inevitable exit once in this season's Champions League. They will need all 11 players at the very top of their game if they are to have any chance of repeating the feat.

Juventus coach Massimiliano Allegri: "I want to congratulate the lads because, as a team, they did great.

"It isn't easy overcoming a team like Barcelona, but we also dug deep to keep a clean sheet. That was fundamental for us.

"But we have to remain humble, keep our heads down and keep working. PSG scored four, and look what happened.

"In Barcelona, it will be different and we have to try and score a goal."

Barcelona coach Luis Enrique: "We basically gifted two goals to Juventus in the opening half. As coach, for me it's inexplicable how they were so much better than us.

"It's like a nightmare. We've had very little luck of late, and now I can only hope that from tomorrow we get back on our feet.

"In the first half the players were determined, but we made the same mistakes from Paris, and that's a problem. Our second half was much better. But I still have the opening half in my head, like a nightmare.

"Maybe it wasn't [a repeat of] Paris, but it was like the third half from Paris.

"I'm an optimistic person. But I take responsibility for this. I'm the coach and the buck stops at me.

"If we play as well as we can, we can score four goals against anyone."

Barcelona host Real Sociedad in La Liga on Saturday before the home leg with Juve. The Italian side travel to Pescara this Saturday and then to Spain four days later. Ronaldo reveals classy reason behind new skinhead haircut The Real Madrid star says his new trim is as a result...

Manchester United are celebrating after winning the UEFA Europa League for the first time in the club's history....